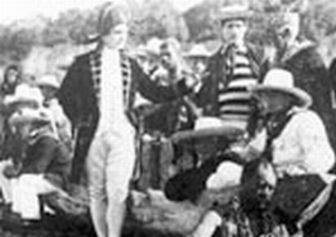 The film The Mutiny of the Bounty is a 1916 Australian silent film and was the first of many to depict this saga. The film starred George Cross as William Bligh and Wilton Power as Fletcher Christian. It was directed by Raymond Longford with a screenplay by Raymond Longford and Lottie Lyell.

No prints are believed to exist of this film, which included scenes of King George III and Sir Joseph Banks