The film Captain Caution is a 1940 US Film set during the War of 1812. The Olive Branch , an American merchant ship owned by Captain Dorman, is returning home from an extended stay in the Far East when the crew abruptly discovers that their country is at war with England after a British brig fires upon them. Dorman is killed and his daughter Corunna vows vengeance on the British. When her sweetheart, sailor Dan Marvin counsels caution instead, she contemptuously dubs him Captain Caution and they are taken prisoner aboard the British ship, where they meet fellow prisoners Lucien Argandeau, his wife Victorine and Slade, a slave trader. 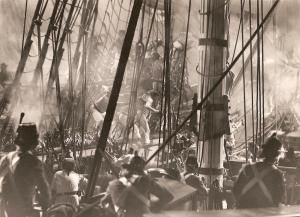 When the British ship falls under attack, the prisoners rebel, overpower their captors, and regain control of the Olive Branch where Corunna appoints Slade first mate and orders the ship to France, where she seeks papers from the American Consul that would commission the ship to fight against the British and enable her to avenge the death of her father.

Slade betrays Corunna by making a deal with the British to capture the ship and turn it over to him and while Corunna is ashore with the American Consul, the British board the ship and sail away with its crew. Slade tells her that Marvin turned the ship over to the English and convinces her to sail away with him. Meanwhile, Marvin and the crew, held prisoner aboard a British ship, escape and commandeer a pleasure yacht. Marvin then convinces the British commander to sail the yacht after Corunna and the Olive Branch . Corunna discovers Slade's treachery when he fires upon the unarmed yacht, but Marvin remains undeterred, and in a scathing sea battle, he and his men take control of the ship. With Slade brought to justice, Corunna discovers her misjudgment of Marvin, and the lovers sail for home.

The film was by Hal Roach Studios and starred Victor Mature as Daniel 'Dan' Marvin, Louise Platt as Corunna Dorman, Leo Carrillo as Lucien Argandeau and Bruce Cabot as Lehrman Slade. It was directed by Richard Wallace with a screenplay by Grover Jones based on the novel Captain Caution by Kenneth Roberts.