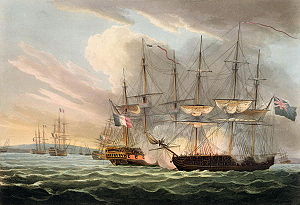 The Battle of Basque Roads took place on the night of 11 April 1809 off the coast of France.

The Battle of the Basque Roads was fought off the Island of Aix, on the Biscay shore of France. Captain Thomas Cochrane led a British force of 27 ships, including explosion vessels and fireships, in an attack against the French fleet anchored in the Basque Roads in two lines and protected by a boom. The explosion vessels destroyed the boom however only 4 of the fireships tried to engage and Cochrane believed the French fleet should have been completely destroyed.

Whilst the fireships missed their target they still inflicted considerable indirect damage as when the French sighted them taking flame several miles away, they believed they were seeing more explosion-vessels at much closer range. Attempting to escape most of the ships either cut their anchor cables and drifted or hoisted sail, but all but 2 drove ashore.

Throughout the morning of 12 April, Cochrane signalled Lord Gambier to attack the paralyzed French squadron. (Gambier was 14 miles offshore with the blockading fleet; Cochrane had one frigate under his command.) Finally, in desperation, at 13:00 Cochrane allowed his ship to drift toward shore, coming under fire of the land-based fortifications, trying to compel Gambier to send ships to aid Cochrane's frigate. The strategy worked; at 13:30, seven British ships came in, and Cochrane spent the rest of the day capturing and destroying French ships.

Much to Cochrane's displeasure, on 13 April, the other ships returned to Lord Gambier's position offshore, and Cochrane ignored repeated orders from Gambier to also disengage. Cochrane instead destroyed more French vessels before finally obeying Gambier's signals, and the battle ended.

Cochrane accused the British commanding officer, Admiral James Gambier, of being reluctant to press the attack. Gambier demanded a court-martial, and was duly exonerated which ended Cochrane's Naval career during the war. 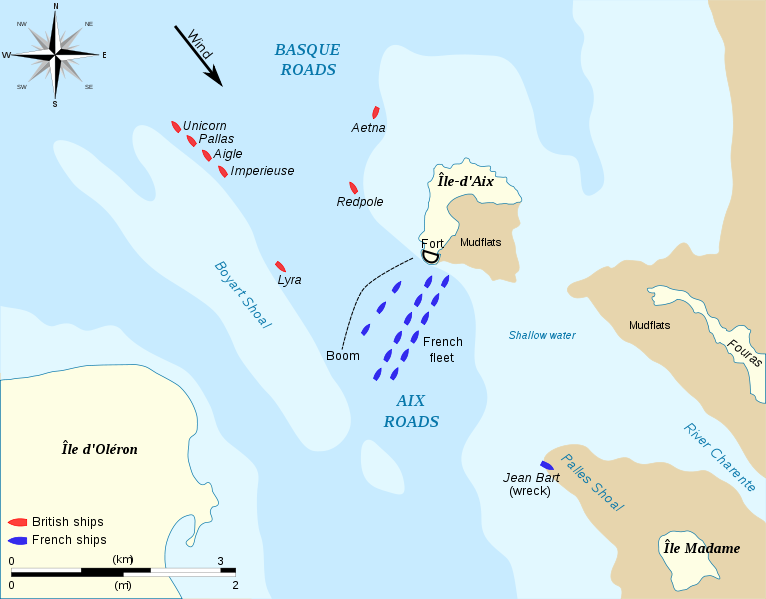