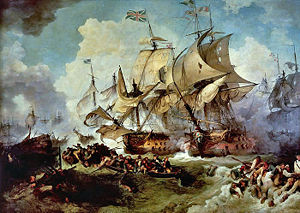 The Glorious First of June, the first fleet action of the Revolutionary War, took place over 3 days in 1794 400 nautical miles (740 km) west of Ushant in the Atlantic Ocean.

The two fleets first sighted each other on 28 May when a squadron of the fastest British ships cut off the rearmost French  vessel Révolutionnaire which was engaged with HMS Audacious as darkness fell. They parted during the night and returned to their respective home ports.

Next day Howe's attempt to split the French fleet in half failed when the lead ship, HMS Caesar, failed to turn when ordered, although both fleets suffered damage in the inconclusive action that followed. Three French ships were sent back to port with damage, but the next day a detached squadron under Admral Nielly joined. The fleets did not engage the next two days because of thick fog. They met again 1 June 1794. Howe ordered each of his ships to turn individually towards the French line, intending to breach it at every point and rake the French ships at both bow and stern however many captains could not break through due to the good order of the French line. This meant that those ships which did break through met the combined fire of many ships and were badly damaged. HMS Defence was the first to break the French line. Within an hour the British and French lines were hopelessly confused, with three separate engagements being fought within sight of one another. Eventually 11 French ships under Villaret in Montagne broke away and formed a new line leaving badly damaged ships of both sides drifting between the two fleets.

After a further brief engagement the two fleets seperated and the French withdrew taking several dismasted ships with them. This led to subsequent condemnation of the British for not capturing more ships although they were badly damaged and the French would most probably have opposed the attempt. Most sources accept that French casualties in the campaign numbered approximately 7,000, including around 3,000 captured, but these figures are vague and frequently do not agree with each other on details. British casualties are easier to confirm but here too there are some discrepancies; overall British casualties are generally given as around 1,200. Whilst the British won the battle, tactically they lost as the grain convoy arrived safely. 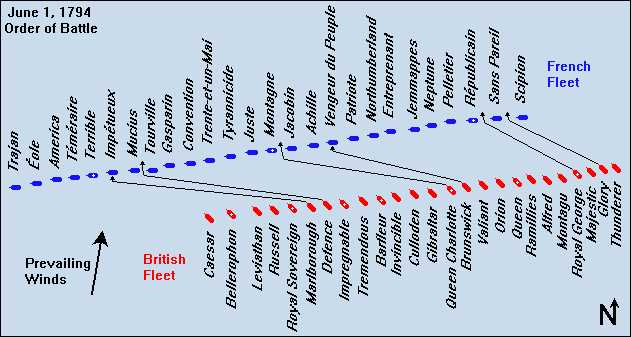