The size of cannon carried varied dependent on the size of the ship and the larger the cannon the larger the crew needed to haul it's weight up to the port. A cannon firing 24 pound shot would weigh about two and a half tons.

In the magazines, the gunner and his mates would have the required amount of gunpowder ready in flannel cartridges which were carried to the guns by ships boys colloquially called 'Powder Monkeys'. The standard rate of fire for British captains was to fire a broadside every three minutes, though faster rates could be achieved, so on a 74 gun ship of the line a large number of cartridges were needed. Quarter gunners supervised the distribution of the charges, so that each cannon was fed almost simultaneously and they in turn were overseen by Midshipmen with a lieutenant in overall command. 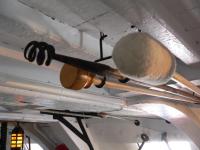 Every man in the the gun crew was assigned specific tasks with a senior hand known as the Gun Captain in charge. He was responsible for seeing that every man did his work, delivering a safely loaded cannon for him to prime, sight and fire.

One man loaded the cartridge into the gun, followed by a cloth wad (typically made from canvas and old rope), whilst another rammed it home with a flexible or wooden rammer . The gun captain would feel for and pierce the flannel cartridge with a small length of wire, known as a pricker, placed down the touch-hole in the breech of the gun, shouting 'Home!' when he had made contact. On the command 'Shot your guns!' a round shot was loaded into the barrel followed by another wad (to prevent the cannon ball from rolling out of the barrel if the muzzle was depressed) and rammed home. 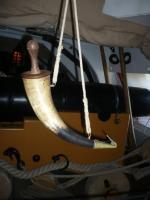 The gun was then 'run out' by hauling it up to the port using gun tackles until the front of the gun carriage was hard up against the ship's bulwark, and the barrel protruded out of the gun port. It was then trained left/right using rope tackles and elevated using crows of iron to raise the breech and then moving the quoin, a wooden wedge, in or out. The touch-hole was then primed using a mixture of fine powder and spirits of wine from a priming horn or a 'quill' (from a porcupine or such, or the skin-end of a feather) pre-filled with priming powder. It would be fired either using a lock; a mechanism bearing a flint similar but heavier than that found on muskets, or a linstock, a wooden staff holding a length of smoldering slow match kept burning in a bucket when not in use. If a lock was being used the hammer was pulled back to half cock at this point. 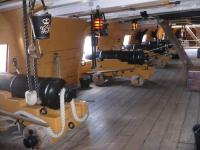 The hammer was pulled back to full cock as soon as the captain was happy with his sighting, and he raised his hand signalling the gun as ready. In his other hand he held a long lanyard or trigger line connected to the lock or the linstock.

On the command 'Fire!' the line was pulled and the hammer clicked creating a spark or the linstock was applied to the touch-hole creating a small explosion in the pan as the priming powder ignited which in turn set off the main charge propelling the shot out of the barrel. As the gun fired it was hurled violently backwards in recoil until it was stopped by the breech rope — a sturdy rope made fast to ring bolts let into the bulwarks, and a turn taken about the gun's cascabel, the knob at the rear end of the gun barrel. 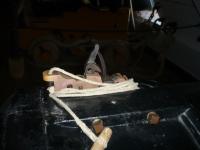 On the command 'Serve/stop your vents!' the touch-hole was closed by means of a man wearing a fireproof glove placing his hand over it. This was to stop gasses passing through the touch-hole which could erode it and cause the gun to become unusable.

The gun was then swabbed out with the other end of the flexible rammer or a seperate swabber that held a sheepskin wad which would be soaked in sea water to ensure all flame was extinguished before the sequence started again with a new cartridge. Every fourth shot a corkscrew worm or wadhook was used to extract any remnants of cartridge left in the barrel.

Instead of round shot, solid spherical cast-iron shot, special projectiles could be used: