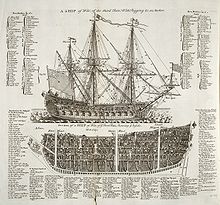 In historic naval fiction books the author will often refer to ships as 'third rate', 'ship of the line' or '74'. This page seeks to clarify how the ships of the Napoleonic era were classified.

The rating system applied to ships of the Royal Navy between the 1670's and the early 19th century but in fiction will often be used to refer to ships of all nations. Whilst ships had been grouped into classes previously, Samuel Pepys revised and formalised the system in 1677. There were 6 rates, 1st, 2nd, 3rd, 4th, 5th and 6th, together with unrated vessels.

Theoretically it was based on the number of cannons aboard, however smaller guns such as swivels were excluded and, more importantly, carronades (sometimes referred to as 'smashers') were not counted. However there were exceptions to this, particularly for some experimental ships which were armed entirely with carronades, and after 1817 they were included.

Also the number of guns in a particular rate changed  as larger and more powerful ships were built. Whilst the rating system was in place, by the 18th century it had mostly fallen out of common use and ships of the line were usually characterised by their nominal number of guns which is followed by authors in references such as "a squadron of three 74s". Rated ships were commanded by a Post Captain.

Smaller ships were simply "unrated". The largest of these were sloops (as were some 6th rates with more guns) with a Commander as captain, the remainder, such as brigs and cutters, being commanded by Lieutenants.

The table below shows the rating system as applied during the Napoleonic wars.

First rates were the largest and most powerful ships but were expensive to build and run and there were not many of them. They were also slow. They were usually reserved for admirals commanding a fleet where additional space for him and his staff was required.

Third rates included the 74-gun ships, the most popular size of large ship for navies of several different nations. It was an easier ship to handle than a 1st or 2nd rate ship, but still had enough firepower to potentially destroy any single opponent and it was also cheaper to operate.

Fourth rates, whilst two deckers and called ships of the line, by the Napoleonic era they were considered too weak to stand in the line of battle. The few that remained were relegated to convoy escort, or as flagships on remote stations.

Fifth and Sixth rates were frigates. Usually used as a fast scouts for a fleet, as independent cruisers or for convoy escort. Also they were sometimes employed together in squadrons where the enemy might be in force but without ships of the line.