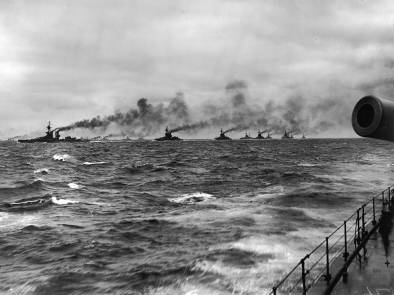 The Battle of Jutland was fought by the British Royal Navy's Grand Fleet under Admiral Sir John Jellicoe against the Imperial German Navy's High Seas Fleet under Vice-Admiral Reinhard Scheer during the First World War. It took place from 31 May to 1 June 1916 in the North Sea, near the coast of Denmark's Jutland Peninsula and was the largest naval battle and the only full-scale clash of battleships in the war

On the afternoon of 31 May Vice-Admiral Sir David Beatty's battlecruiser squadron encountered Vice-Admiral Franz Hipper's battlecruiser force. In a running battle, Hipper successfully drew the British vanguard into the path of the High Seas Fleet. By the time Beatty sighted the larger force and turned back towards the British main fleet, he had lost two battlecruisers from a force of six battlecruisers and four battleships, against the five ships commanded by Hipper. The battleships, commanded by Rear-Admiral Sir Hugh Evan-Thomas, were the last to turn and formed a rearguard as Beatty withdrew, now drawing the German fleet in pursuit towards the main British positions. Between 18:30, when the sun was lowering on the western horizon, back-lighting the German forces, and nightfall at about 20:30, the two fleets – totalling 250 ships between them – directly engaged twice.

Fourteen British and eleven German ships were sunk, with great loss of life. After sunset, and throughout the night, Jellicoe manoeuvred to cut the Germans off from their base, hoping to continue the battle the next morning, but under the cover of darkness Scheer broke through the British light forces forming the rearguard of the Grand Fleet and returned to port.

The following books have been tagged as featuring the battle.