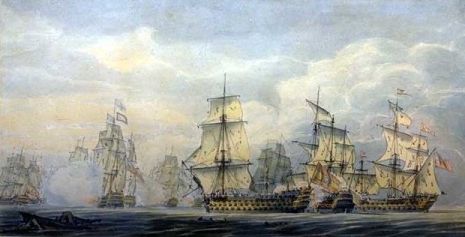 The Battle of Cape St. Vincent took place on the 14th  February 1797 off the coast of Portugal.

The Spanish fleet was formed in two loose columns, one of about 18 ships to windward and the other, of about 9 ships, somewhat closer to the British. The single British steered to pass between the two Spanish columns.

The British line, led by Culloden, tacked in succession to reverse course and overhaul the larger Spanish column. The smaller Spanish division engaged the British line at the point they were tacking and some British ships were damaged and fell out of the line. As the last ship in the British line passed the end of the main Spanish line, the British line was in a U shape with Culloden in the lead and on the reverse course but chasing the rear of the Spanish. The Spanish lee division bore up in an effort to join their compatriots. Nelson, in Captain, towards the rear of the British line, disobeying previous ordered Captain Miller to take Captain out of line and engaged tthe smaller group. Other British ships from both ends of the line Culloden,  Excellent, Blenheim and Prince George, supported this and prevented the two Spanish groups combining. The Captain was now under fire from up to as six Spanish ships, three of  112 guns and including Cordóba's flagship Santísima Trinidad (130).

San Nicolás ran foul of San José, and they were boarded and taken by Captain, whilst 2 other Spanish ships struck to the supporting ships.